Warning: count(): Parameter must be an array or an object that implements Countable in /nfs/c10/h14/mnt/148075/domains/4worldsunited.org/html/wp-content/themes/Minamaze_Pro/admin/meta/init.php on line 746
 Stories of United Worlds – 4 Worlds United Soccer Alliance 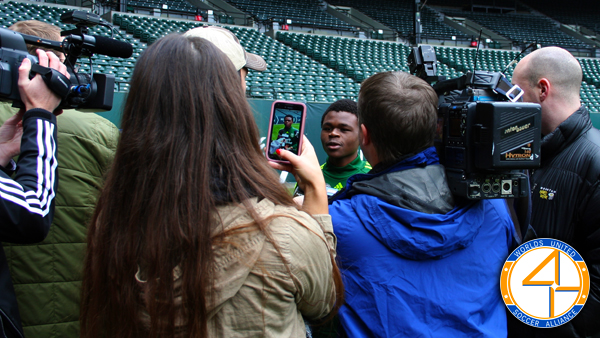 Issa is a survivor. Only his mother and six of his siblings survived the exodus from war-torn Somalia. They fled their home and walked over 100 miles to safety. Issa’s family arrived – scared and exhausted – at Dadaab refugee camp in Kenya with thousands of others. With only the clothes they wore, they set up home – living with 450,000 refugees in a camp with resources for only 90,000. Issa’s new home was filled with desperation, disease and fear. Hunger was Issa’s constant companion. Soccer was his only distraction – the kids gathered with a ball of plastic bags tied together to play soccer before the sun was too hot.

As if it was yesterday, Issa remembers the day he heard the news that he and his family were leaving Dadaab to go the United States. He was elated and scared – he knew very little of the place that would become his new home. He would leave behind his friends, soccer and his family’s hut.

Issa adjusted to his new life, new country and new language quickly. Although he came here without speaking English, Issa achieved grade-level standards after three years. His struggled to connect to their new country. His mother was devastated by the loss of her husband and children. Without the aid of school, she was not able to learn English as quickly as her children. She depended on Issa to take on many responsibilities – Issa helps manage the family’s legal affairs and finances, translating documents to help his mother understand their meaning and implications. In the early years, Issa would help his siblings with their homework and then spend hours on his own.

Shortly after moving here, Issa played in a program called “Soccer in the Park” organized by the community that would come together to create 4 Worlds United. He was a shining star with great skills, great leadership and a great hunger to learn.

With the help of Mark Verna, President and Founder of 4 Worlds United, Issa entered into a competitive soccer league. Other coaches noticed him immediately for his skills and his intensity on the field. Families noticed him for his kind manner and supported his family through generosity. His teammates noticed him for his compelling kindness and sense of humor. The USA Olympic Development Program noticed him and invited him to try out for the Oregon team.

In 2009, Issa placed onto the US Under15 roster. Issa continued to play with the ODP squad as it transformed into the Portland Timbers US Academy team.

Today, Issa is a starting player with the Portland Timbers Academy team. He will be attending high school like any other student while playing on a team that has 13 games out of the city. He will do all of this and strive to maintain his current 3.2 GPA. He dreams of college.

Update: Issa is now at Evergreen State College, studying and playing soccer on a full scholarship!

4 Worlds United and the greater community have always supported Issa and his dream as it becomes real because we are inspired by his vision, perseverance and his generosity to those around him as he works towards seemingly impossible goals. His teammates’ families have become part of Issa’s story – they help pay his fees, help him with homework and drive him to games and to practices. We are dedicated to Issa and to making all of his dreams reality. 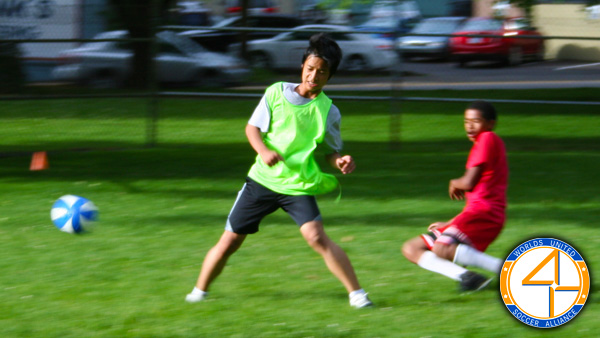 When Peter was eight, he and his family left the Mae Sa Ray refugee camp and arrived in a new world – the United States. No one spoke English. No one knew about their new home and community.

Peter struggled to learn his new language and his new surroundings. A couple years ago, a 4 Worlds United volunteer saw Peter standing on the side, shyly watching summer soccer sign-ups. The volunteer invited him join in and play with the other kids.

Although Peter had never played organized soccer before, he moved around the field with agility. He improved week by week and was ready for a competitive environment.

4 Worlds United provided Peter with the opportunity to play on a competitive soccer club team, arranging a scholarship, donations for uniforms and equipment, and transportation to practices and to games.

Within one season, Peter has excelled as a forward and goal keeper. With his humility, Peter seamlessly integrated himself with his teammates. He jokes around and is more outgoing.

Peter’s life was made a bit easier through the opportunity to play soccer during the summer and on a competitive team. He continues to play well, and if his performance on the soccer field is any indication, he will keep playing and living like a champion!

Momo was three when his family arrived in the United States. He has no memories of his family’s struggles in Dadaab.

When he was seven, Momo made his debut at 4 Worlds United summer soccer. In one smooth motion, Momo stripped the ball away from a 13-year-old competitive soccer player with a slide tackle, tripped the player, stood up into a full run and finished with a goal. He did all of this with the big smile that has become his trademark.

Although Momo is the youngest on his team by one year, he moves around the pitch with great comfort and confidence. He often creates moves on the fly and develops plays and soccer moments that stun the spectators, coaches and players during a game. After the game, he is surrounded by parents and coaches who want to meet him.

Momo is known by his soccer peers for his skills, fun attitudes and friendly nature. Momo exemplifies the positive force of soccer and how it provides a platform for such a positive person to express himself and succeed at an early age in our world.

Update: as of 2016 Momo has participated in the Oregon ODP State Team program, traveled to Phoenix AZ for a regional tournament, and continues to play at the highest levels with his teammates at Northeast United Soccer Club.